We sat down outside the dorms before the game and had out team meeting and planned on what we needed to concentrate on against a very large and talented Alcatraz Outlaws team they won the tournament in 2011 and had watched them the night before in their warm up game! 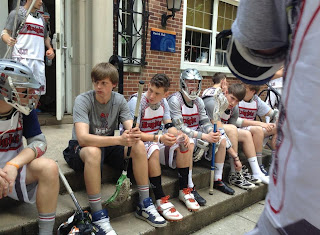 We wanted to not create offense for the other team, play team defense and also play our game! we wanted to compete all over the field and make them work for everything and earn their goals!

The game started in intense heat that would turn into a storm later in the game, we really did make them work for everything but their shooting was at a very high standard and shot past Will Baxter's ear for their first goal and continued to shoot well, we slid well and everyone was up for competing against these guys! Josh Peachey led from the back and handled his match up well, the kid he was marking was a beast! 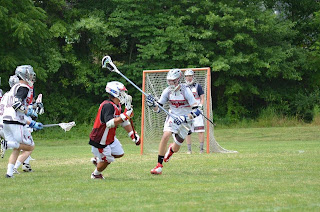 Alex and Alex played well in attack and tested their defenders on multiple dodges!, Alex Russell coming close on a great inside roll and dive and Alex Winton blasting past his man trying to find the open man!

We got our Goal from Cape Cod and Poynton's own Jake Howarth, Alex Winton drew the slide and found a cutting Howarth, Jake caught the ball in his right hand close to the post and shot around the back and scored! 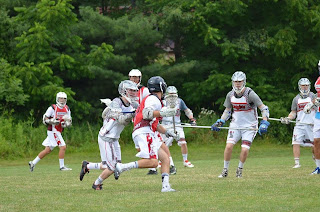 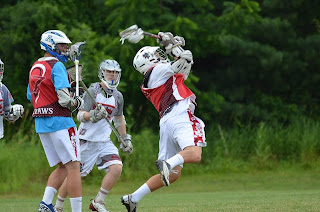 The heavens then opened and it began to rain!, I thought great we are used to this and it may go in our favour!................the refs had been told to abandon the game because of Lightning and we would have a half hour break to see if the weather cleared, we walked to the gym again to hold up and see what happened! 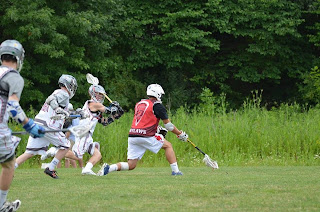 Unfortunately we never returned to the field but the physios came out and invited us into the training room to watch Wimbledon as they where intrigued by the English lads, we stayed in their for 30 mins and the game had been called off and we would play it again in the morning!

The weather continued to be foul and we also missed out playing at 7pm against Amped up and all the games where cancelled for the evening.

We had dinner in the Cafeteria that gets better and better and Jak Vav arrived after his day of trains and buses to get here and cant say how much I appreciate him coming to help out and has been a part of this since day one. He arrived just in time to eat, the lads where looking forward to seeing him and we have spent the night sitting outside having a laugh talking to the other teams and trading!

We found out later from our good friend Matt Edmund's from Georgia Tech that the game would be re-scheduled for 7:15 in the morning and we would need to be up at 6am!..........you can tell that went down well.

Injury report - Elliott Hurry's ankle is getting better and is treating it himself, he is such a nice kid and not someone you have to worry about losing their key or leaving their meal card in the dorms, we are going to see the physios before tomorrows game to see f he is good to go!

The lads are having a great time together and found that Tig has some crazy dance moves that ill try and upload on video!!! haha they really seem to be enjoying being together and are a funny bunch!

Coach Zac Guy will arrive tonight also and will spend the week with us.