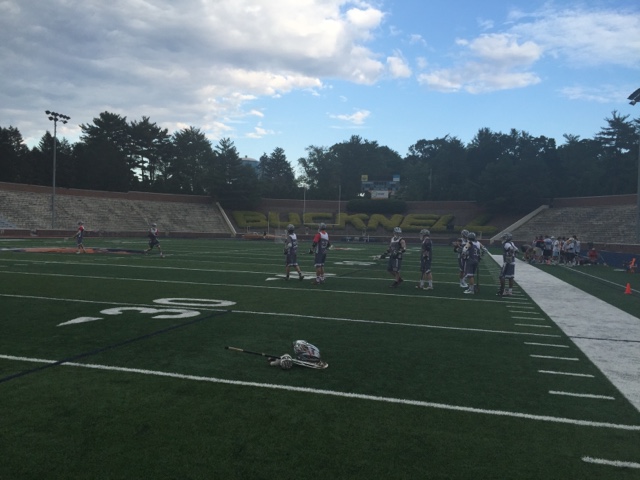 What a fantastic opportunity for our players and program to play a group of incoming Bucknell recruits (called Futures) in Bucknells main stadium. We arrived with plenty of time so we could take it all in.
We looked great in the warm up and as this game does not count towards the tournament (they are playing every team but will not compete in the playoffs) we were relaxed and having fun Our players always relish this challenge and will be something they talk about for a long time.
The whistle blew for the first face off and Chas hadn't moved and their face off guy had already won it and was at the 40'yard line, he was from State Campion high school New Canaan in Conneticut and had very quick hands.
We played solid defence again and slid and recovered well, Matt Tatton, Dan Walker and especially Adam Fox played great one on one Def and we played as a unit. Peacock and Chopper do a great job in every game and share the LSM position. Matt Tatton loves to cover the oppositions best guy and did a great job again. Dan Walker plays his angles very well and doesn't get beaten often.
We did go 1-0 up from a great Goal from Matt Smith, the lads obviously went crazy and so they should, Futures scored a few goals after that, Hal made some great saves and was up to the challenge and as the Bucknell Head Coach said afterwards looked he very comfortable out there.
We play some great offence when we are patient with Oli Loveland always being at X to find the open man. It's great to watch for me after 2 years of planning to see it in front of my own eyes is very satisfying! Ben Page came close to scoring at GLE however the ball bounced of the goalies ankle and was very unfortuante.
Again as many times before our ride was great and Billy ended up with the ball from a pass from Ollie Billing finished low and away on the goalie.
Elliott Leonard inverted his man and we have a play to open up a wing shot or otherwise not allow the dodger to be double teamed easily, no one could slide and he rolled his man at GLE to finish near side top corner.
The final goal for us came from a great wing dodge and fed again by Ollie to the crease to Will Cornwell, his defender was all over him and he still caught the ball to fake and finish.
The game finished 16-4 but doesn't tell the tale we played good defence and made small mistakes to let the high calibre of players on Futures to capitalise. Burkey played great in the second half and the whole team made plays to tell everyone when they return this Saturday. We had learnt a lot and played in an amazing venue, this was an opportunity that not many people have and I hope they enjoyed it, they did us proud and Bucknells coaches praised us after the game. Their players loved having a picture with us, some of these guys will be stars in the NCAA in a years time.
It's now 00:42 and the lads have been in bed since 11:30, with a 9am game we need to be at Breakfast at 7:30am and up at 7am. Night night and thanks for all the support. We have our best to come from this tournament and still think we can do very well.
Goals
Matt Smith
Billy Kershaw
Will Cornwell
Elliott Leonard
Assists
Oliver Loveland 2 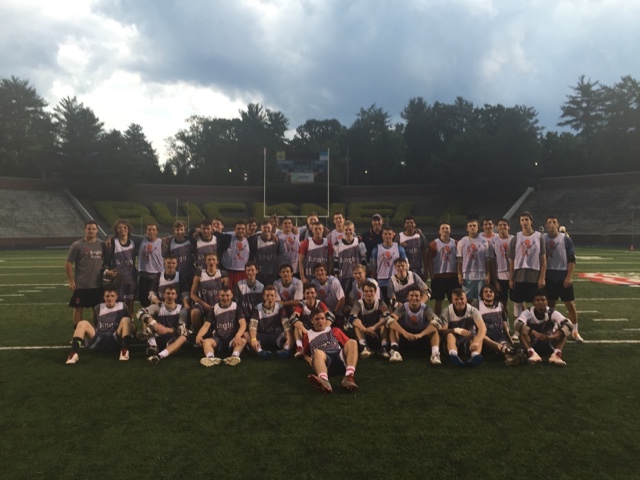 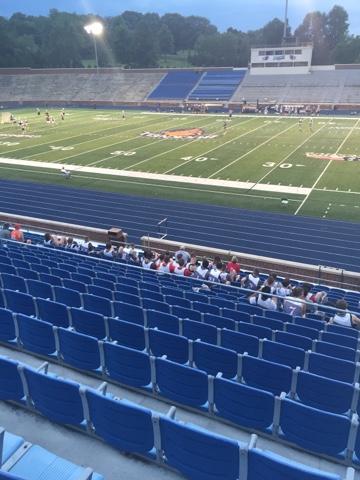