I knew this was going to be a quality tournament, well organised and a high standard of opposition, we would have to build through-out the tournament and learn a lot.
I saw the organiser after breaking and entering, Coach Bremeier from Darien High School is a legend of the sport and won the state championship this year undefeated, he's someone I admire and watch his team online. I tanked him for accommodating us and gave him a Knights cap whilst the boys made their way to field 4 for our game against Black Bears.
Before the game Mike Connor arrived, he was a member of Knights I and good friend of ET2, he played and now coaches in the US and is a huge supporter of the program. He had taken time away from his busy recruiting program to help us coach.
We had no idea what to expect from this team but the boys where glad to be in Strong Island and at an amazing tournament with beautiful fields in the shadow of a huge stadium. We awarded up and knew that we had to step up, cut out mistakes, manage the game and go out with confidence.
This plan came to fruition, the parents lined the side line and we had now been joined by the Robinson clan which was great to see. The boys came out and gave the most complete performance yet. Very like the game at the Gait Cup we came out strong and played fast and with confidence. This defence is the best yet and they play as unit, George Dunn is a great leader and had really started to take over leading the defence, with our best consisitant defensive performer Oli 'the decapitator' Chadwick doing his thing and Will 'Waaaabboottt' Abbott as the third starter we where solid. Backed by both Goalies Ethan 'the burg' Mockford and Lewis 'battered sausage' Moore making saves for fun gave the defense confidence. Jordon Hall had over achieved on this tour and complimented the SSDM Cam 'the beast' Major and Tom McArdle brilliantly. I think the opposition middies saw Cam as the match up and wasted time getting the ball around until they dodged on him, this went in our favour as he plays great position defence and lifts and guides the offensive player to bad areas, we/he calls it wrapping them up into a little box or putting them in his pocket.
Ethan made an amazing save in this game and from what I heard one of the best saves most people have ever seen! 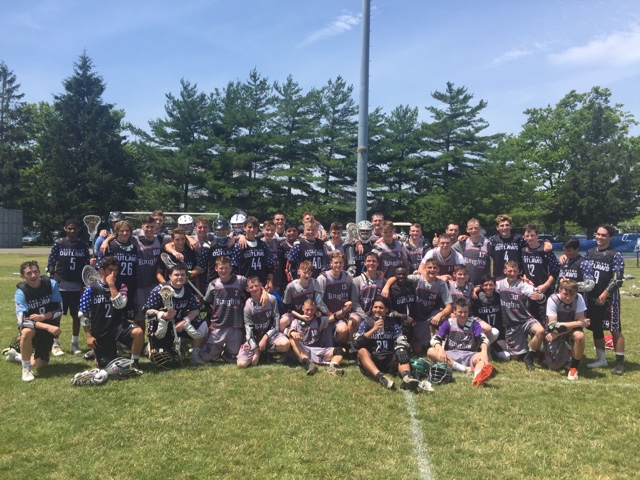 Saves - 12
Faceoffs - 8
I arrived back just in time for the game, I was carrying a Nike box as I had to nip to Dicks with Mike Connor to purchase some cleats for George Dunn. He had forgotten to pack them and his turf shoes where not cutting it. He wanted Nike Huaraches and it had taken a couple of minutes to decide on all white or grey and dark grey! It's Knights so we went with the grey as they looked amazing. He looked pleased when he opened the box!
The Outlaws are one of the best teams in the nation, with 130 college commits since 2013.
This was a chippy game with Outlaws playing well, they have some athletic players but the English lads wouldn't back down after our amazing morning win.
You could see the play of Ed Loveland improving each game, he had come into his own this tournament and the team needed it, the combination of Ed, Elliott and Will Prescott had become potent and the offence had a good balance. With Nathan who is very dangerous off the dodge and shooting inside and Billy Stewart coming off the bench, it was working well. Will and Ed both scored twice in this game and Mike Pomfret had really began to finish he ball well, I think it was down to the change of stick!
Marius had really started to play well, he had learned to play within the confides of the offence and had made some big plays for us clearing the ball and picking up ground balls, we could see he was desperate for a goal and needed him to be a threat. He got what he deserved and the team realised this scoring in front of his parents and the players got behind him.

We had really started to honour the ball and get good shots at the end of possessions but for all the hard work of the offence we played amazing def  - George Dunn in his new cleats made it hard off the dodge to feed or shoot, communicates well and really slides with good timing, Oli Chad our glue guy just hangs out and plays position D but then bursts into action and is aggressive, Will Abbott is another aggressive players who likes to takes people's wrists on ground balls and is always around to slide. Kai Shawcross played a mixture of midfield LSM and straight def and never let us down, once he develops and dedicates himself to this sport he can be a great, very athletic and always gets to the GB first. Harry Emuss is just a great back up rarely makes mistakes and because of his size has a great reach to knock down passes or turn the offensive player. I've mentioned  Jordon Hall before our regular LSM he always there to put players on the carpet, win a GB and just generally harass his man!

We had traded goals with the Outlaws throughout the game and it was very physical. I kept reminding the players that they only had the power to win and this came from within all of us,  we needed to keep behind each other and be more physical than they where. It was great to see this change in the team they had learnt how to win which can't be coached, it's a self belief. As we went two up it was still tight we knew that they could come back with their talent, as they players ran off the field after another goal I thought I'd give the, some motivation and shouted 'If they are the Outlaws we are the Sheriff'!!! Which got a few laughs and lifted the spirits! It's a play on my 2015 pun 'if they are Venom, we are the antidote' line!

Olviver Beaumont and Dan Madeley had amazing games for us and absolutely won the game for us, the amount of possessions they won for us was scary, they where both playing at an Elite level.
After the game a guy came over to our team huddle dressed in a green Vermont polo, clipboard and carrying a fold up chair, I recognised him as Jake Bernhardt as he had played at Maryland and was followed by his two brothers, his younger brother Jared was a freshman at Maryland in 2017 and played for USA U19s. Coach Bernhardt also plays for the Ohio Machine in the MLL and He asksed us if we'd like to come to the locker room before tonight's game to meet the players, it was so kind of him to come over and to approach us, he didn't have to and it was a kind gesture!! The lads looked excited! I had already bought the team tickets to the MLL game anyway so it was a no brainier!

We had picked up some Injuries in today's physical contests, Jordon had taken a shot to the helmet, Dan Madeley had suffered a knee injury (contact), George was still suffering from a thigh injury and was walking like John Wayne and OB had a nasty slash mark on his thigh, Cam had also rolled his ankle. The trainer pictured below was a great guy and really looked after us, I think we over worked him but was always friendly and asked the boys to come back to check in with him before they played or was happy to give the, a bag of ice. Thanks Mr Trainer! 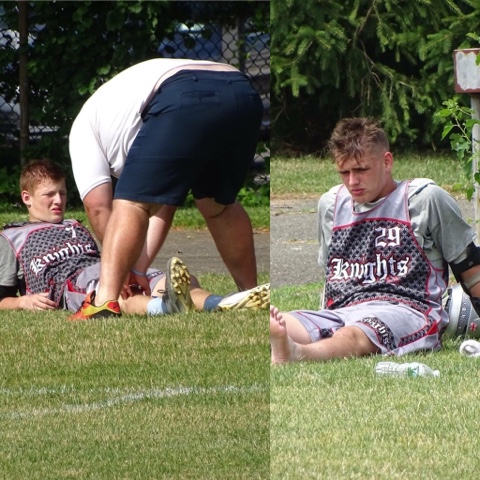 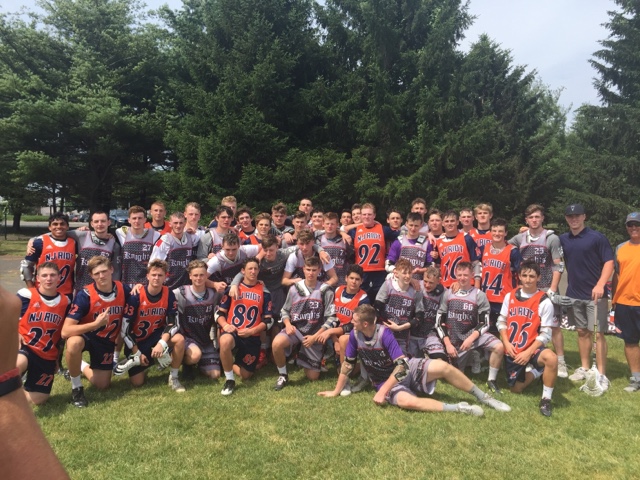 Saves - 8
Face offs 2
We knew about NJ Riot they are an amazing program. The day hadntake. It's toll on some players - Cam Major had hurt his ankle, Dan Madeley had a contact injury to his knee, OB Oliver Beaumont had a nasty slash mark on his thigh and George Dunn was struggling with a leg injury.
Joe Cheetham has played on the team on our previous tour in 2015 and contributed heavily as a rookie, he doesn't do losing and isn't afraid of anyone, he can score big outside rips or placed shots on the run and didn't lie down for Riot scoring two important goals.
Dan Madeley deserved a goal for his great work at the face off X, he sprinted down the field and unleashed a shot, it looked like the goalie had it covered but fluffed it and the ball trickled in!! Seriously one of my favourite goals as I knew how important it was for him and he deserved it, he came off the field beaming still hobbling slightly from his knee injury but just happy to play through it. They breed em tough in the Dale!

Hofstra stadium - Ohio Machine @ NY Lizards MLL
We managed to get to the stadium on time and as we walked up to the stadium we received a shout from a lady at the gate are you the English Knights? She ushered us through the gate and we where greeted by Coach Bernhardt, I had brought a red (Maryland colours) Knights cap as a gift. The boys went up to a barrier outside the locker room and the players came out to greet us. Jake Bernhardt, Connor Cannizzaro, Tom Shreiber, Marcus Holman, Dominique Alexander, Patrick Kelly and the behemoth Scott Rogers! We tried to get Mr Rogers to arm wrestle McArdle but he had the beats on and was warming up. It was a great experience for the team and we really appreciated them taking time out to speak to us!
The lads had a great time at the game and raised their game when the cheerleaders came out, as the game got more exciting towards the end they where all up chanting, dancing and making noise, the old couple sat behind us had a look on their face that was a mix of amazement and confusion! We do what we want! 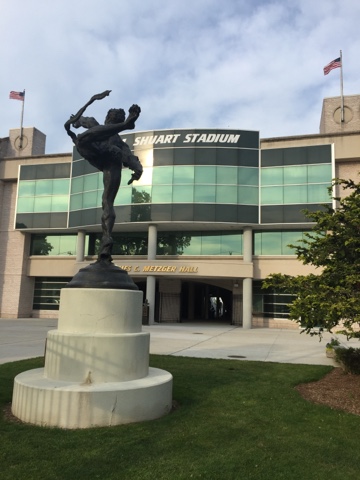