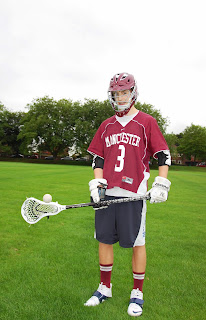 Local boy Billy Kershaw is preparing for the biggest lacrosse games of his life, as he joins England’s finest schoolboy players as they prepare to take on some of the best American high school teams.

Billy Kershaw (14), who lives in Didsbury and is a student at The Manchester Grammar School, was one of just five attackers selected to join the Elite English Knights team as they train for the next two years to take part in the Bison Brawl and the Gait Cup at Gettysburg University in Philadelphia.

As Billy explained: “Fifty of us took part in the trials with 23 selected to join the team. Competition for a place was tough as we were competing against the best players in the country including some from the American School TASIS, who take their lacrosse really seriously, but I’m delighted to have secured mine and can’t wait to go!”

Billy started playing lacrosse when he was just eight years old after he and his mum visited the Didsbury Festival and saw a leaflet about it.

He has since done his own research, delving deep into the sport’s roots: “I completely immersed myself into the research of my new favourite sport. I found out so many interesting facts; it’s the fastest growing sport in America and was actually originally founded by Native Americans more than 3,000 years ago. I knew I had to be a part of that,” added Billy. Billy has also earned a place on the England Academy’s U15s team as well as being a longstanding member of Manchester Waconians – the only lacrosse club in the city of Manchester which is now more than 100 years old. As well as preparing for his trip across the Atlantic he is also preparing to play with Lancashire U16s in the hotly anticipated East vs West All Stars where the county takes on Cheshire.

Concluded MGS Director of Sport Mark Walmsley: “I am delighted to see one of our students thrive in a sport that he clearly loves.”